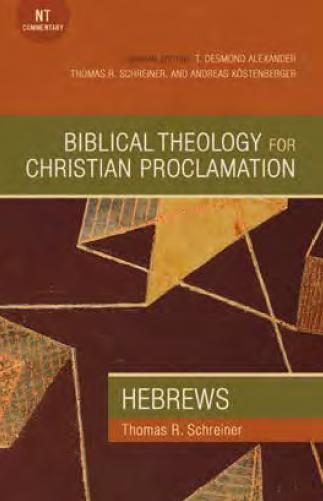 In his volume on Hebrews, Thomas R. Schreiner says, “The words of Jesus on the cross, ‘it is finished’ (John 19:30) capture the theology of Hebrews.”My aim in this commentary is to focus on the biblical theology of the letter. The emphasis on biblical theology shows up especially in the introduction and conclusion where theological structures and themes are considered. In the introduction I will examine four different structures that are woven into the entire letter: 1) promise/fulfillment; 2) eschatology; 3) typology; and 4) spatial orientation (which can also be described as the relationship between heaven and earth in the letter). The commentary will conclude, after presenting an exegesis of each chapter, with a discussion of some major theological themes in Hebrews.

“Most modern commentaries consist of significant introductions and then conduct an intensive exegesis of the text, chapter by chapter and verse by verse. By way of contrast, the introduction and the commentary are relatively brief and non-technical. With the proliferation of commentaries today, a new commentary should have a distinctive approach. We now have many excellent commentaries on Hebrews which examine the letter in some detail. Many of these commentaries provide a useful function in that they draw on other parallels from both Jewish and Hellenistic literature to illuminate Hebrews. The advantage of such an approach is that the reader is plunged into the cultural world of the author. On the other hand, the careful sifting of various traditions may cause the reader to lose track of the argument of the letter. At the same time, the theology of the author may be muted, not because it isn’t recognized but because it may be difficult to follow in the welter of information given to readers. I hope a commentary that probes the theology of Hebrews will prove to be helpful. I have been helped by many scholars in preparing this commentary, especially those who have written in depth commentaries and those who have written monographs on the letter. No one writes from an objective standpoint, and hence I should state up front that I write as an evangelical Christian who believes that the scriptures are the living and authoritative word of God.”

April 14, 2016 5 5
Thomas Schreiner has set the bar high in this first offering in a new commentary series. The book is a smaller(physical) size than most commentaries, making it handy to hold. The content is in line with what you would expect from Schreiner. Anything he writes is pure gold. The approach taken in this series is very suited to those who preach and teach systematically, with the added bonus of 80 pages at the end of the volume dedicated to 9 highlighted theological themes, perfect for in-depth study. Each chapter is attractively set out for ease of use, and Schreiner's prose also flows aiding comprehension and appreciation of the argument. I look forward to further volumes in the series! Highly recommended.
Ryan Boyer

April 25, 2015 5 5
I and about 250 pages in while working through Hebrews for a future preaching series. Schreiner is such a lucid writer and engages with a wide range of materials on Hebrews. He effectively keeps the author's main points in view making this daunting book much easier to understand and see the pastoral nature of the letter. Highly recommend.