Jews and Christians in the First and Second Centuries: How to Write Their History

Jews and Christians in the First and Second Centuries: How to Write Their History 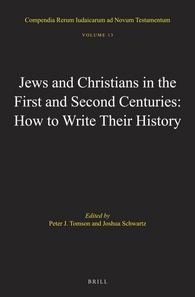 The papers in this volume are organized around the ambition to reboot the writing of history about Jews and Christians in the first two centuries CE. Many are convinced of the need for a new perspective on this crucial period that saw both the birth of rabbinic Judaism and apostolic Christianity and their parting of ways. Yet the traditional paradigm of Judaism and Christianity as being two totally different systems of life and thought still predominates in thought, handbooks, and programs of research and teaching. As a result, the sources are still being read as reflecting two separate histories, one Jewish and the other Christian.

The contributors to the present work were invited to attempt to approach the ancient Jewish and Christian sources as belonging to one single history, precisely in order to get a better view of the process that separated both communities. In doing so, it is necessary to pay constant attention to the common factor affecting both communities: the Roman Empire. Roman history and Roman archaeology should provide the basis on which to study and write the shared history of Jews and Christians and the process of their separation.

A basic intuition is that the series of wars between Jews and Romans between 66 and 135 CE – a phenomenon unrivalled in antiquity – must have played a major role in this process. Thus the papers are arranged around three focal points: (1) the varieties of Jewish and Christian expression in late Second Temple times, (2) the socio-economic, military, and ideological processes during the period of the revolts, and (3) the post-revolt Jewish and Christian identities that emerged. As such, the volume is part of a larger project that is to result in a source book and a history of Jews and Christians in the first and second centuries.