The Myth of a Gentile Galilee

The Myth of a Gentile Galilee Mark A. Chancey 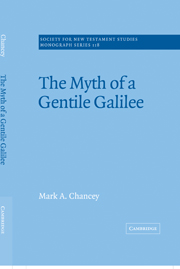 This investigation of Galilee during the time of Jesus demonstrates that, contrary to the perceptions of many New Testament scholars, the overwhelming majority of Galilee's population were Jews. Utilizing the gospels, the writings of the Jewish historian Josephus, and published archaeological excavation reports, it traces the historical development of the region's population and examines in detail specific cities and villages. It is the only book-length treatment of this subject and is the fullest synthesis available of archaeological and literary evidence for first-century CE Galilee.