Carmen Christi: Philippians ii. 5-11 in recent interpretation and in the setting of early Christian worship 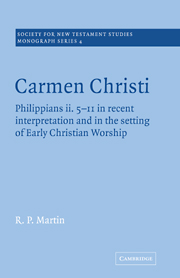 From the earliest times, commentators have regarded these few verses from the Epistle to the Philippians as doctrinally very important, and a whole literature has grown up around them. Dr Martin studies the passage partly for its own sake as the quintessence of Pauline thought on the person of Christ, and partly as an example of an early type of Christian literature known as 'cultic' or 'confessional'. He sees it as a carmen Christi, a Christological ode used among early believers. Its importance, as Dr Martin shows, reaches far beyond the devotional. The Church which sang this hymn proclaimed for the first time the three 'epochs' in the existence of Christ: he is hailed and confessed first as pre-existent, then as incarnate and humiliated and finally as triumphant. The hymn is thus the earliest extant statement of the basis of the whole Christology of later times.