Jewish Traditions in Early Christian Literature: Volume 5: The Didache: Its Jewish Sources and Its Place in Early Judasim and Christianity 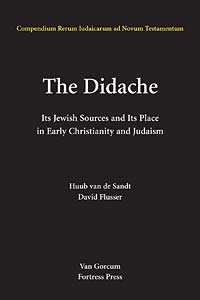 This latest addition to the monumental Compendia series offers original thinking and impressive erudition about the Didache. The early Christian manual for baptismal catechesis focuses a valuable lens on the nascent Christian community and early Judaism. In the document's rules for church morals, ritual, and discipline, Huub van de Sandt and the late, great scholar David Flusser find clues to the evolution of Christianity and Judaism from a shared heritage in Jewish sources. The authors hypothesize that an initial Jewish tractate (the so-called Two Ways tractate) evolved into a composite Judaeo-Christian text (independently circulating until Medieval times) and then into its final form as the Didache in an anti-Jewish, gentile church.