Israel in the Apostolic Church 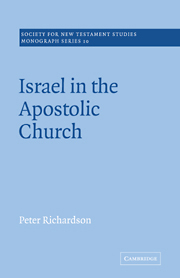 This historical study is concerned with the adoption by Christianity of Jewish prerogatives and attributes, and in particular with its assumption of the name 'Israel'. Dr Richardson's claim is that this was not a simple development, as it is usually conceived to be, but one which took place over a long period. The equation between the Church and the 'true Israel' does not occur, Dr Richardson argues, until the mid-second century in the works of Justin Martyr. The book is concerned mainly with an exegetical study of the New Testament passages relevant to the argument, concentrating on the Pauline epistles. There are other sections on the attitude of Jesus himself towards Israel, on post-Pauline developments, on political factors and on the early Fathers to A.D. I6o. The book ends with a synthesis of conclusions, and there are appendixes on the Sects of Judaism, Paul's Use of Laos and the Apology of Aristides. This comprehensive analysis of a vital problem in the early Church's life and witness has many important implications for a theology of the Church.