Warfare in the Old Testament: The Organization, Weapons and Tactics of Ancient Near Eastern Armies

Warfare in the Old Testament: The Organization, Weapons and Tactics of Ancient Near Eastern Armies Boyd Seevers 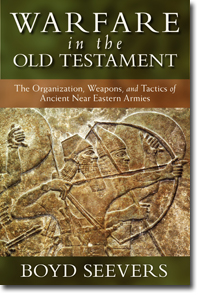 Warfare in the Old Testament helps bridge the gap between the modern reader and the world of the Old Testament by using textual and physical evidence to describe ancient military practices. Seevers paints a realistic picture of how Israel and the surrounding nations did battle, adding depthand impact to the relevant biblical accounts. Filled with illustrations, this full-color volume explores the archaeological evidenceand early writings that shed light on biblical warfare between Israel and its neighbors: Egypt, Philistia, Assyria, Babylon, and Persia. Of special interest are Seevers’s treatments of the role that religion played in these ancient warfare practices.