Studies on the Testament of Job

Studies on the Testament of Job Michael A. Knibb and Pieter Willem Van Der Horst 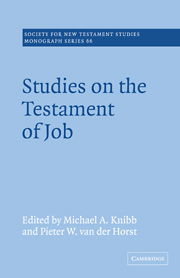 Bringing together as it does papers delivered at the 1986 and 1987 meetings of the Studiorum Novi Testamenti Societas Pseudepigrapha Seminar, this collection takes as its theme the Testament of Job. For much of the modern period the Testament of Job has been one of the lesser-known pseudepigraphic products of early Judaism, and this book attempts to remedy the deficiency of scholarly material in the area with a well-balanced treatment of its central concerns. Approximately the length of the New Testament book of Romans, the Testament celebrates the virtue of patience through a folkloristic elaboration of the Biblical story of Job. Yet the Testament adopts from the Biblical story scarcely more than the framework, much of it highlighting themes unusual in both early Christian and early Jewish writings. From the viewpoint of the history of religions it is of interest for its image of Satan, its ecstaticism and its emphasis on magic; it sheds light on the Jewish background of the early Christian phenomenon of glossolalia; and it is intriguing because of the remarkable role it assigns to women. The contributors to this volume are all distinguished scholars, and they provide an accessible introduction to this relatively neglected ancient document.