Second Corinthians in the Perspective of Late Second Temple Judaism

Second Corinthians in the Perspective of Late Second Temple Judaism 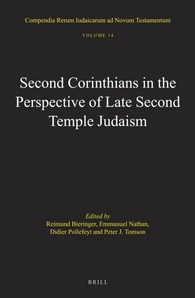 In the framework of a larger research project into ‘New Perspectives on Paul and the Jews’, eight scholars from Europe, Israel, and North America join forces in querying Paul’s relationship to Jews and Judaism. The sample text selected for this inquiry is the Second Letter to the Corinthians, a document particularly suited for this purpose as it reflects violent clashes between Paul and rivalling Jews and Jewish Christians. While the first three articles address more general literary and historical questions, the following five present in-depth case studies of much-studied passages from the letter and the underlying issues. An introductory essay queries how in the case at hand we can gain an adequate understanding of Paul’s theology while fully respecting his particular place in Judaism.
The book addresses scholars of the New Testament and Christian origins, Ancient Judaism, and Early Church History.