Greco-Roman Culture and the Galilee of Jesus

Greco-Roman Culture and the Galilee of Jesus Mark A. Chancey 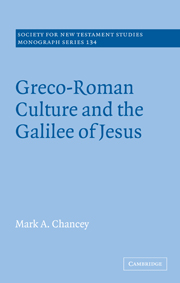 Examining architecture, inscriptions, coins, and art from Alexander the Great's conquest until the early fourth century CE, Mark Chancey argues that the extent of Greco-Roman culture in the time of Jesus has often been greatly exaggerated. Antipas's reign in the early first century was indeed a time of transition, but the more dramatic shifts in Galilee's cultural climate happened in the second century, after the arrival of a large Roman garrison. Any attempt to understand the Galilean setting of Jesus must recognize the significance of the region's historical development as well as how Galilee fits into the larger context of the Roman East.