The Ituraeans and the Roman Near East: Reassessing the Sources

The Ituraeans and the Roman Near East: Reassessing the Sources E. A. Myers 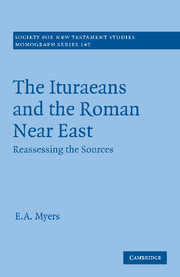 The Ituraeans, a little-known people of late first century BCE Syria/Palestine, are referred to briefly in a number of early texts, notably Pliny, Strabo and Josephus, and the principality of Ituraea is mentioned in Luke 3.1. There is, as yet, no consensus among archaeologists as to whether certain artefacts should be attributed to the Ituraeans or not. They form a mysterious backdrop to what we know of the area in the time of Jesus, which remains obstinately obscure despite the enormous amount of research in recent decades on the 'historical Jesus' and Greco-Roman Galilee. Through reference to the early texts, modern scholarship has contributed to a claim the Ituraeans were an Arab tribal group known mainly for their recurrent brigandage. Elaine Myers challenges these presuppositions and suggests a reappraisal of previous interpretations of these texts and the archaeological evidence to present a more balanced portrait of this ancient people.