Saul and the Monarchy: A New Look

Saul and the Monarchy: A New Look Simcha Shalom Brooks 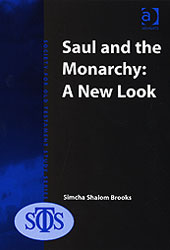 The negative biblical presentation of King Saul of Israel has been biased in favour of David at the expense of Saul. This book presents a more positive picture and more realistic view of the culture of the period extending from Saul to the schism. Simcha Shalom Brooks explores a number of controversial issues such as the historicity of the biblical text on which so many modern scholars are sharply divided; that David was ambitious and coveted Saul's throne, and even though David became king, the people continued to support the house of Saul.

This book makes a valuable contribution to the current biblical debate as to the existence of ancient Israel in the Iron Age 1 Period. Simcha Shalom Brooks draws on literary, historical and archaeological material to present a balanced view of the period.