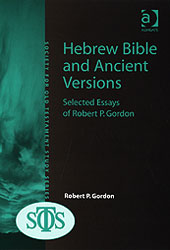 Robert Gordon gathers together his most important essays on the Old Testament and on the ancient versions, adding an introduction which gives background comment and reflections on each essay. The Old Testament essays are divided into three groups: The Narrative Tradition', 'Prophecy from East to West', and 'Across, Behind and Beyond the Text'. The essays on the ancient versions are divided into two sections: 'The Text and the Versions' and 'The Targums, Chiefly to the Prophets'.