Relics of Ancient Exegesis A Study of the Miscellanies in 3 Reigns 2 D. W. Gooding 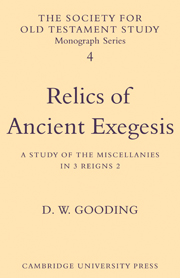 The fourth book in this established series of monographs on aspects of Old Testament studies is a detailed analysis of two passages that may well hold the key to the major textual problems raised by the ancient Greek translation of 1 Kings (3 Reigns in the Septuagint). The existence of these two extended passages, standing in 3 Reigns 2 at verses 35 and 46, has long been noticed and partial studies have been made by some scholars. In the present study Dr Gooding not only offers a detailed analysis of all the diverse elements that go to make up these passages but also demonstrates that these originally diverse elements, many of which were themselves either variant readings or alternative translations and interpretations of the Hebrew, have been carefully edited and arranged by some ancient scholar-exegete to form a discourse or midrash on two aspects of Soloman's reign. This monograph will therefore be of interest not only to Septuagintal experts but also to all who are interested in the history of Biblical interpretation and canon.