By the Irrigation Canals of Babylon: Approaches to the Study of the Exile

By the Irrigation Canals of Babylon: Approaches to the Study of the Exile 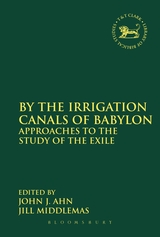 This work assembles some of the finest scholars who have contributed to study and examination of the impact of the exile in biblical literature. Past, present, and future scholars examining the 6th century B.C.E. through historical and archaeological (including paleoclimatology), literary, and the social sciences have been assembled. Approximately 12 papers from among the 20 papers presented over the four sessions (parallel to a sizable conference on the exile) will be represented in this volume.

The book will be organized in a traditional history of scholarship manner, i.e., moving from historical to sociological. It should be noted that within each subcategory, there is a forward progressive movement from a traditional starting point (Klein, Olson, Wilson) ending at the progressive or cutting edge (Beck, Ahn). Jill Middlemas will open the volume with and introductory essay. John Ahn will close off the volume by pointing to the field of "forced migration studies" as a way to help better define and demarcate the import of 597, 587, and 582.