Peoples of an Almighty God: Competing Religions in the Ancient World

Peoples of an Almighty God: Competing Religions in the Ancient World Jonathan A. Goldstein 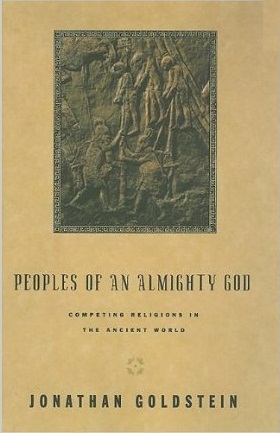 Some ancient civilizations, notably the Babylonians and the Israelites, held fast to the belief that their particular god (or gods) were stronger than all other heavenly powers and gods combined, supremely able to protect their well-being and success as a nation. This belief (which resounds in the modern-day rallying cry "God is on our side") led to some foolhardy and rash decisions, particularly when it came to war. For a nation defeated or conquered by a foreign power inevitably faced the profound, perplexing question: "Why did our God, who has sworn to protect us, allow this to happen?"

Jonathan A. Goldstein turns to the religious literature of these ancient peoples to discover how they reconciled their beliefs with the realities of history. In a magnificent blend of several academic disciples (literary criticism, political theory, biblical and classical history), he compares and contrasts the responses of different eras and nations – from the Israelites, Babylonians, and Egyptians to the Zoroastrians, Iranians, and Persians under Alexander the Great. Goldstein’s close readings of literature written following such devastating events as the fall of the Israelites to the Assyrians and the Babylonians demonstrate that theology, far from being a static and unchanging set of beliefs, evolves with the course of history. Revealing how each defeat helped to shape and define the religious beliefs of the conquered, Peoples of an Almighty God clearly demonstrates that no belief can remain unchanged or untouched by the beliefs of other people.