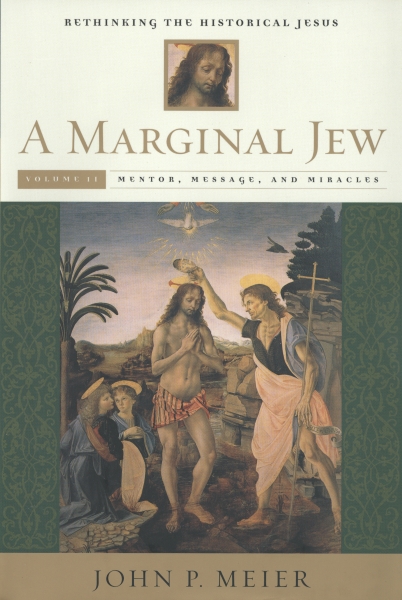 This book is the second volume in John Meier's masterful trilogy on the life of Jesus. In it he continues his quest for the answer to the greatest puzzle of modern religious scholarship: Who was Jesus? To answer this Meier imagines the following scenario: "Suppose that a Catholic, a Protestant, a Jew, and an agnostic were locked up in the bowels of the Harvard Divinity School library... and not allowed to emerge until they had hammered out a consensus document on who Jesus of Nazareth was and what he intended...". A Marginal Jew is what Meier thinks that document would reveal. Volume one concluded with Jesus approaching adulthood. Now, in this volume, Meier focuses on the Jesus of our memory and the development of his ministry. To begin, Meier identifies Jesus's mentor, the one person who had the greatest single influence on him, John the Baptist. All of the Baptist's fiery talk about the end of time had a powerful effect on the young Jesus and the formulation of his key symbol of the coming of the "kingdom of God." And, finally, we are given a full investigation of one of the most striking manifestations of Jesus's message: Jesus's practice of exorcisms, hearings, and other miracles. In all, Meier brings to life the story of a man, Jesus, who by his life and teaching gradually made himself marginal even to the marginal society that was first century Palestine.