The Jesus Movement and Its Expansion: Meaning and Mission

The Jesus Movement and Its Expansion: Meaning and Mission Sean Freyne 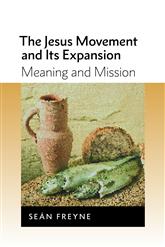 Authoritative account of the Jesus movement's Greco-Roman and Jewish matrix and its development into the second century In this book Seán Freyne explores the rise and expansion of early Christianity within the context of the Greco-Roman world — the living, dynamic matrix of Jesus and his followers. In addition to offering fresh insights into Jesus' Jewish upbringing and the possible impact of Greco-Roman lifestyles on him and his followers, Freyne delves into the mission and expansion of the Jesus movement in Palestine and beyond during the first hundred years of its development. To give readers a full picture of the context in which the Jesus movement developed, Freyne includes pictures, maps, and timelines throughout the book. Freyne's interdisciplinary approach, combining historical, archaeological, and literary methods, makes The Jesus Movement and Its Expansion both comprehensive and accessible.