The Books of Daniel, Ezra, Nehemiah

The Books of Daniel, Ezra, Nehemiah A. J. Rosenberg 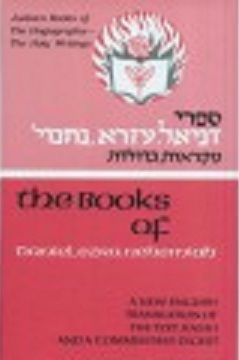 The Book of Daniel deals with the experiences of Daniel, who, with his companions, Hananiah, Mishael, and Azariah, was exiled to Babylon by Nebuchadnezzar. Because of their wisdom, they were chosen to serve in the royal court, where Daniel continued to serve during the reigns of Belshazzar and Darius. This book includes the narratives of Daniel's companions in the fiery furnace and Daniel's experience in the lion's den. It also contains Daniel's interpretation of Nebuchadnezzar's dreams and his visions of the future. The Books of Ezra and Nehemiah, traditionally counted as one book, deal with the return to the Holy Land after the Babylonian Exile. They relate the trials and tribulations of the Jews returning from exile, both physical and spiritual, and how their leaders, Ezra and Nehemiah, solved these problems, including the rebuilding of the Temple. This invaluable aid to learning Tanach is used by students around the world! It provides the benefit of owning two sets in one, since each volume features both the complete Hebrew Mikraoth Gedoloth as well as a concise, modern English translation of the text with extensive commentary. In addition, each and every Rashi is translated, as are selections from the Ramban, Sforno, Rashbam, Ibn Ezra, from Talmudic and Midrashic sources, and numerous other commentaries never before translated. Rabbi Moshe Feinstein, zt"l, gave his unstinting approbation to this now classic series.