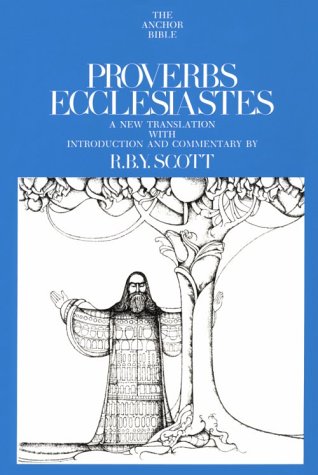 Proverbs and Ecclesiastes (Volume 18 of the acclaimed Anchor Bible series) are translated and edited by R.B.Y. Scott, Professor Emeritus, the Department of Religion, Princeton University. Volume 18 contains two books of the Bible which are part of the "wisdom" literary tradition in ancient Israel and in neighboring cultures. In his General Introduction, Professor Scott presents the context in which both books emerged, and breaks new ground in his survey of the history of the Wisdom Movement. Proverbs And Ecclesiastes, considered together, are as instructive in their similarities as in their differences. Each has a coherent view of life, and each proceeds ultimately from a religious premise. Yet no two books could be more strikingly different. Proverbs is a collection of literary and folk maxims and adages, often sententious, sometimes humorous, compiled as a source book for the education of youth. It is a guide to practical wisdom, pointing the way to a virtuous and successful life. The translator, in both the introduction and notes, traces the literary history of the work, and in addition analyzes the various types of proverbs common to the Bible as well as to other folk and literary traditions. The book of Ecclesiastes, unlike Proverbs, is intensely personal, speculative, seemingly negative in outlook. The product of one pen, the philosophic and poetic outpourings of one troubled mind, Ecclesiastes, in its pessimistic eloquence, is unmatched in biblical literature--perhaps in any literature. Yet Ecclesiastes is not a work of despair, for it ends finally on a note of affirmation: its wisdom stems from long pondering on the mysteries of man's existence, and its conclusions, far from facile, are all the more persuasive because they are hard-won. Ecclesiastes is a short book, beautifully and faithfully rendered in this volume: the translation is not only a considerable scholarly contribution to biblical studies; it is also a high literary achievement.