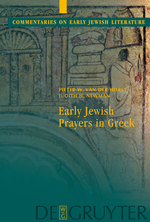 During the past few decades a great amount of scholarly work has been done on the various prayer cultures of antiquity, both Graeco-Roman and Jewish and Christian. In Jewish studies this burgeoning research on ancient prayer has been stimulated particularly by the many new prayer texts found at Qumran, which have shed new light on several long-standing problems. The present volume intends to make a new contribution to the ongoing scholarly debate on ancient Jewish prayer texts by focusing on a limited set of prayer texts, scil. , a small number of those that have been preserved only in Greek. Jewish prayers in Greek tend to be undervalued, which is regrettable because these prayers shed light on sometimes striking aspects of early Jewish spirituality in the centuries around the turn of the era. In this volume twelve such prayers have been collected, translated, and provided with an extensive historical and philological commentary. They have been preserved on papyrus, on stone, and as part of Christian church orders into which some of them have been incorporated in a christianized from. For that reason these prayers are of great interest to scholars of both early Judaism and ancient Christianity.