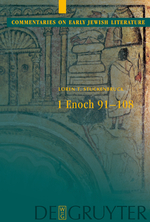 The volume is a commentary on 1 Enoch chapters 91-108 that begins with the Ethiopic text tradition but also takes the Greek and Aramaic (Dead Sea Scrolls) evidence into account. This section of 1 Enoch, which contains material from at least five different documents composed some time during the 2nd century BCE, provides a window into the early stages of the reception of the earliest Enoch tradition, as it was being negotiated in relation to elitist religious opponents, on the one hand, and in relation to other Jewish traditions that were flourishing at the time. The commentary, at the beginning of which there is an extensive introduction, is structured in the following way: there is a translation for each unit of text (including the Greek and Aramaic where it exists, with the Greek and Ethiopic translations presented synoptically), followed by detailed textual notes that justify the translation and provide information on a full range of variations among the manuscripts. This, in turn, is followed by a General Comment on the unit of text; after this there are detailed notes on each subdivision of the text which attempt to situate the content within the stream of biblical interpretation and developing Jewish traditions of the Second Temple period. The five documents in 1 Enoch 91-108 are dealt with in the following order: (1) Apocalypse of Weeks (93:1-10; 91:11-17); (2) Admonition (91:1-10, 18-19); (3) Epistle of Enoch (92:1-5; 93:11-105:2; (4) Birth of Noah (106-107); and (5) the Eschatological Appendix (108).