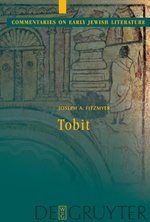 Commentaries on Early Jewish Literature is a new series in English dealing with early Jewish literature between the third century BC and the middle of the second century AD; it is scheduled to encompass a total of 58 volumes. The texts are intended to be interpreted as a textual unity against the background of their particular Jewish and historico-political contexts, with text-based, historical, literary and theological analyses being undertaken. The first volume, by Joseph A. Fitzmyer, is devoted to a commentary on the Book of Tobit (Tobias).