Reading Ezekiel: A Literary and Theological Commentary Marvin A. Sweeney 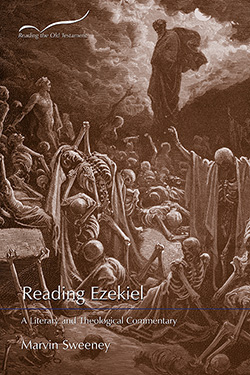 In this new volume in the Reading the Old Testament commentary series, biblical scholar Marvin A. Sweeney considers one of the most interesting and compelling books of the Hebrew Bible. Ezekiel is simultaneously one of the Bible’s most difficult and perplexing books as it presents the visions and oracles of Ezekiel, a Judean priest and prophet exiled to Babylonia in the sixth century BCE. The book of Ezekiel points to the return of YHWH to the holy temple at the center of a reconstituted Israel and creation at large. As such, the book of Ezekiel portrays the purging of Jerusalem, the Temple, and the people, to reconstitute them as part of a new creation at the conclusion of the book. With Jerusalem, the Temple, and the people so purged, YHWH stands once again in the holy center of the created world. As Sweeney writes in his introduction, the book of Ezekiel ultimately represents “a profound attempt to encounter the holy in the profane world, and based on that encounter, to sanctify the world in which we live.”