Hosea: A Commentary based on Hosea in Codex Vaticanus

Hosea: A Commentary based on Hosea in Codex Vaticanus W. Edward Glenny 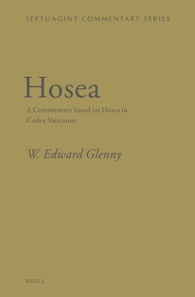 Rather than studying the LXX of Hosea mainly as a text-critical resource for the Hebrew or as a help for interpreting the Hebrew, this commentary, as part of the Septuagint Commentary Series, primarily examines the Greek text of Hosea as an artifact in its own right to seek to determine how it would have been understood by early Greek readers who were unfamiliar with the Hebrew. This commentary is based on the uncorrected text of Vaticanus, and it contains a copy of that text with notes discussing readings that differ from modern editions of the LXX along with a literal translation of that text. This commentary also has an introduction to the Minor Prophets in the Septuagint. It is relevant for anyone studying the LXX or the book of Hosea.