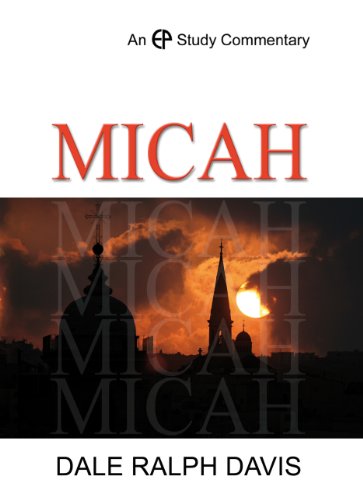 As part of the EP Study Commentary series, Dr Dale Ralph Davis shows how the prophet Micah lived in dark times. He was often a lone voice living in a godless society. He preached what the people needed to hear (unlike the false prophets around at the time); it was a message of judgement, but also of hope as it pointed towards the coming of Christ. These were dark times where corruption and violence were rife, the vulnerable were the victims of exploitation and the religious leaders failed to speak out against the people's sin, but instead gave them the message they wanted to hear. Micah declared the future glories which await the true people of God, Jews and Gentiles alike. With such a prospect in view, the book closes on a note of triumphant praise to God as the prophet marvels at his grace and faithfulness to his people. Using his own translation from the Hebrew, Dale Ralph Davis shows how many of the situations Micah addresses are very relevant to the experiences of Christians in various parts of the world in our own day. He presents the prophet, and the faithful remnant to whom he ministered, as an example and encourage-ment to us all to start living the life of the next age in this present age, and to trust God's promises, however dark our circumstances may appear, in the assurance that he has a glorious future yet to come for his church. Dale Ralph Davis is teaching elder at Woodland Presbyterian Church, Hattiesburg, Mississippi, and previously served as Professor of Old Testament at Reformed Theological Seminary, Jackson, Mississippi.