The Book of Acts in its Palestinian Setting

The Book of Acts in its Palestinian Setting Richard J. Bauckham 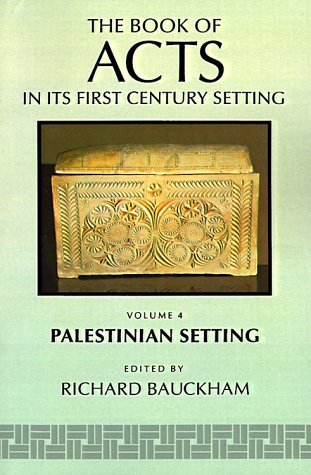 Working to place the Book of Acts within its first-century setting, well-known historians and biblical scholars from Australia, the United States, Canada, Russia, Germany, France, Israel, New Zealand, and the United Kingdom have collaborated here to provide a stimulating new study that replaces older studies on Acts, including aspects of The Beginnings of Christianity. The composition of Acts is discussed beside the writing of ancient literary monographs and intellectual biographies. Recent epigraphic and papyrological discoveries also help illumine the text of Acts. Archaeological fieldwork, especially in Greece and Asia Minor, has yielded valuable information about the local setting of Acts and the religious life of urban communities in the Roman Empire. These volumes draw on the best of this research to elucidate the Book of Acts against the background of activity in which early Christianity was born. The Book of Acts in Its Palestinian Setting is devoted to a series of studies of those parts of the narrative of Acts that are specifically set in Palestine. The geographical, political, cultural, social, and religious aspects of first-century Jewish Palestine are all explored in order to throw light on Luke's account of the Palestinian origins of early Christianity. There are fresh assessments of the historical significance of key features, persons, and events in Luke's narrative.