Ecclesiastes in "The Remarkable Wisdom of Solomon" 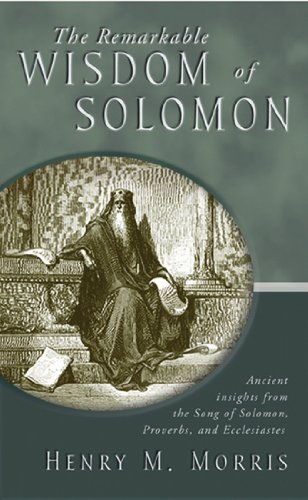 After the birth of the Jewish nation, but before the brutal string of invading Pagan armies, there arose an Israel a king whose splendor was so rich, his very name is still spoken with awe: SOLOMON

Inheriting and expanding a magnificent kingdom from his father, King David, Solomon, attained both spiritual and material wealth, confounding his enemies and thrilling his own people. The Bible claims there will never be another like him. His legacy includes three canonical works that flowed from God to his pen - Proverbs, Ecclesiastes, and Song of Solomon.

Strangely, these three books are rarely examined by modern scholars, but longtime author and defender of the faith, the later Henry Morris, provided and invaluable commentary. His examination of Solomon?s life, and the insights into the writings themselves, give the Bible student a worthy tour through the life of a most remarkable man.

Henry Morris, Ph.D. , (deceased) earned the title, "The Father of Modern Creationism", through with his numerous writings about the creation/evolution debate. He was a respected scientist and wrote, textbook author and the founder of the Institute for Creation Research in California.