Luke in "A Popular Commentary on the New Testament, vol. 1: The Gospels of Matthew, Mark, & Luke" 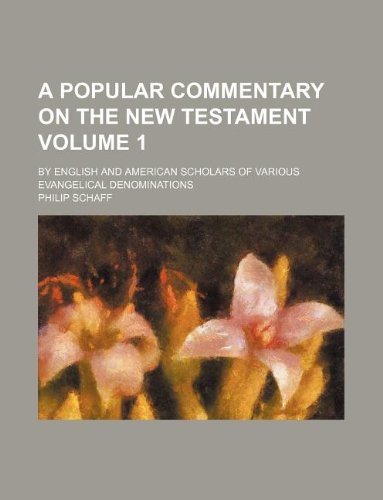 This historic book may have numerous typos and missing text. Purchasers can download a free scanned copy of the original book (without typos) from the publisher. Not indexed. Not illustrated. 1878 Excerpt: ...the Passover. That ended on Friday, on Saturday (the Jewish Sabbath) they would not start for Galilee; perhaps they waited over Sunday because they already regarded it as holy. (7.) In Galilee, at the Lake of Gennesaret to seven disciples (John xxi.), the third time to the assembled Apostles (John xxi. 14). (8.) To the multitude of disciples on a mountain in Galilee (Matt. xxviii. 16-20; comp. Mark xvi. 15-18; I Cor. xv. 6). Possibly the passage in I Cor. refers to still another appearance. (9.) To James (1 Cor. xv. 7). It is doubtful which James this was; and equally so whether it was in Galilee or Jerusalem. (10.) The final appearance, closing with the Ascension (Luke xxiv. 50, 51; Acts i. 9, 10). Probably referred to in the last clause of 1 Cor. xv. 7. Others make that a distinct appearance, and so reckon (see under 8) twelve instead of ten. Why did not Christ show Himself to His enemies? John xiv. 19 fairly implies that our Lord would not thus do. If we look for reasons why He would not, they may readily be found. As regards His enemies His holiness forbade such an honor to those who had wickedly crucified Him; His wisdom forbade His constraining them to a belief, not of the heart, which would only rouse anew false expectations; His love forbade it; for those who could be reached by the gospel would be far more ready to receive it, if there had not intervened such an appearance to them. Without the Spirit's influence it would only have hardened them. As regards His disciples, such appearances would have interfered with the progress of their strengthening conviction of His resurrection, by depriving them of the assuring intercourse and quiet contemplations of the forty days. As regards the proof of the fact: those who will not accept the testimony which ...