Discourse Grammar of the Greek New Testament: A Practical Introduction for Teaching and Exegesis 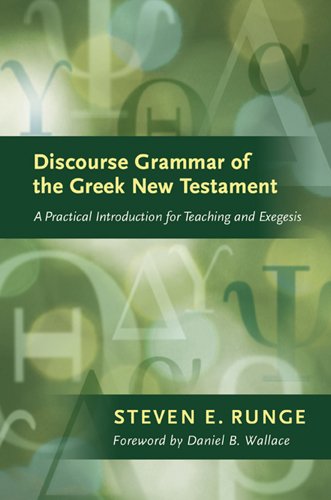 In Discourse Grammar of the Greek New Testament, Steve Runge introduces a function-based approach to language, exploring New Testament Greek grammatical conventions based upon the discourse functions they accomplish. Runge's approach has less to do with the specifics of language and more to do with how humans are wired to process it.

The approach is cross-linguistic. Runge looks at how all languages operate before he focuses on Greek. He examines linguistics in general to simplify the analytical process and explain how and why we communicate as we do, leading to a more accurate description of the Greek text. The approach is also function-based--meaning that Runge gives primary attention to describing the tasks accomplished by each discourse feature.

This volume does not reinvent previous grammars or supplant previous work on the New Testament. Instead, Runge reviews, clarifies, and provides a unified description of each of the discourse features. That makes it useful for beginning Greek students, pastors, and teachers, as well as for advanced New Testament scholars looking for a volume which synthesizes the varied sub-disciplines of New Testament discourse analysis.

With examples taken straight from the Lexham Discourse Greek New Testament, this volume helps readers discover a great deal about what the text of the New Testament communicates, filling a large gap in New Testament scholarship.

Each of the 18 chapters contains:

* An introduction and overview for each discourse function
* A conventional explanation of that function in easy-to-understand language
* A complete discourse explanation
* Numerous examples of how that particular discourse function is used in the Greek New Testament
* A section of application
* Dozens of examples, taken straight from the Lexham Discourse Greek New Testament
* Careful research, with citation to both Greek grammars and linguistic literature
* Suggested reading list for continued learning and additional research